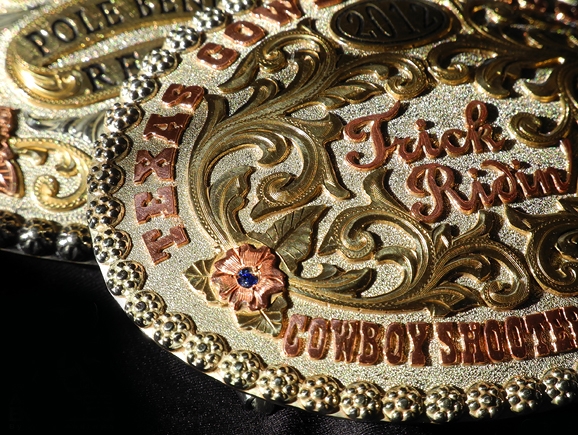 In 2021, most of us associate trophy buckles in Utah with cowboys, rodeo champions, and the wild west. Today, those immersed in the culture surrounding country music and rodeos don these ornate, oversized belt buckles to make a statement. But where do trophy belt buckles come from? Your custom belt buckle maker, A Cut Above Buckles, is here to answer that question.

Before cowboys ever wore belts, they wore suspenders. In fact, in the 1800s, most men wore suspenders, not belts. The only time belts were worn in the United States before the 1920s was by military personnel, who wore them not for function, but for decoration. In Europe, it was custom for soldiers to go into battle looking their best by wearing large, engraved belt buckles. While soldiers wore buckles made of brass, higher military officials had buckles made of gold.

This tradition made its way into the United States. Revolutionary War veterans would don such belt buckles, as well as those who were fighting in the Civil War. At first, belt buckles mostly were decorated with engravings of military symbols, but soon symbols of western culture began to be incorporated into belt buckle designs as well.

When Did Cowboys Start Wearing Belts?

In the 1920s, Levi Strauss started producing jeans with belt loops. This was the first ever American brand to mass produce these types of pants, and consumers — including cowboys — began making the switch from suspenders to belts, as they were much more convenient and functional. Around the same time period, rodeos began awarding winners with rodeo belt buckles.

What was Hollywood’s Role in Popularizing Trophy Buckles in Utah?

Around the same time as the belt renaissance of the 1920s, Hollywood was producing a number of films that romanticized the lives of cowboys — think Tumbleweeds (1925), the Virginian (1929), The Big Trail (1930). Filmmakers would turn up the cowboy aesthetic to make their films more appealing, and soon real cowboys started dressing more like movie cowboys.

Hollywood was also responsible for popularizing shiny belt buckles. Edward H. Bohlin, a Swedish immigrant and leather crafter, worked closely with the moviestar Tom Mix, making him custom saddles and belts. Mix was primarily known for his roles in cowboy movies, where he would sport Bohlin’s custom belts, which featured silver trim and accents. Bohlin’s belts were some of the first to have the luster we see on belt buckles today.

A Cut Above Buckles is your trusted custom belt buckle maker honoring the history of western aesthetics in the United States. Our founder and president Andy Andrews is a real cowboy, so you can be sure that your trophy belt will be expertly crafted. Whether you’re a cowboy, a veteran, a rodeo champion, or a fan of western culture, A Cut Above Buckles has something for you.